Has someone put the year on fast forward? Seriously,where has 2016 gone, and why are the holidays right around the corner?  I am convinced that there is a time warp enacted, someone must have pushed the button back in March...

I think we were all excited about Jen's sugar skulls this month at the Art Elements blog!  Mine arrived a few days before I left on my first vacation in three and a half years - also my first trip home in the same amount of time.  I tucked it into my little box of beads and projects, along with some pre-stitched pieces and coordinating beads.  I knew I would be busy with daytrips, family and travel...but sometimes it's really beneficial to have a family of hermits that go to bed early.  My brother and I spent a couple of evenings watching moves while I beaded.  Now, looking at my creation while separated from my home by 3,000 miles, I can see the influences of the Pacific Northwest.

So much green! I knew that I wanted to place the skull on a foundation of one color, so that it stood out as much as possible, allowing me to add accent beads to tie the skull into the piece as a whole. 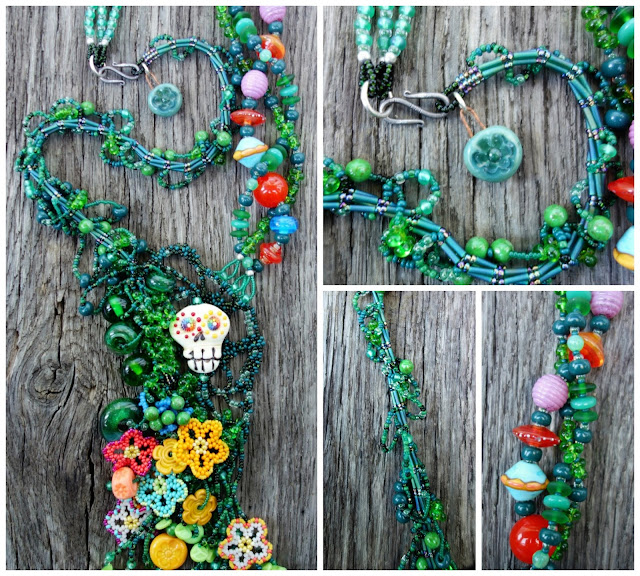 One of the prestitched pieces I drug on my tip was a green tubular herringbone rope piece.  I decided to use it as one side of the strap, and worked a foundation of freeform netting and peyote off of one end for the skull to land on.  The other side of the strap consists of three strands of beads strung on beading cable - seed beads, Czech pressed glass, and lampwork by SueBeads.  I had originally intended to leave the strands separate, but after I got them all attached to the clasp, I didn't like the results.  Not wanting to restring anything, I tried a simple braid and the undulation of the lampwork strand now seems to fit into the rest of the piece better. As you can see, I added some embellishment to the herringbone side as well - to add some visual weight as a counterbalance, and to tie it into the organic party in the middle...  The clasp is a simple s-hook, and I attached one of Sue's little flower dangles for a bit more whimsy. 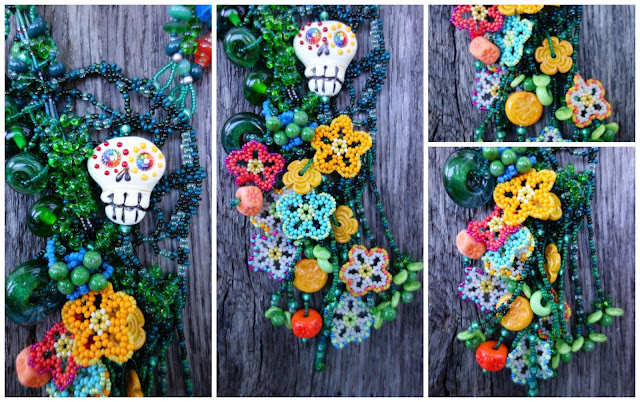 I left most of the right side of the foundation bare, but needed to add both physical and visual weight to the left side to balance out the heavier strap.  I used lampwork by Sue and several other artists, Czech glass, and beadwork flowers in the fringe to bring color, movement and texture into the fringe.  I had originally intended the beadwork flowers to embellishment a ceramic skull cab, but with the bright accents and eyes on this skull...he just needed these flowers! 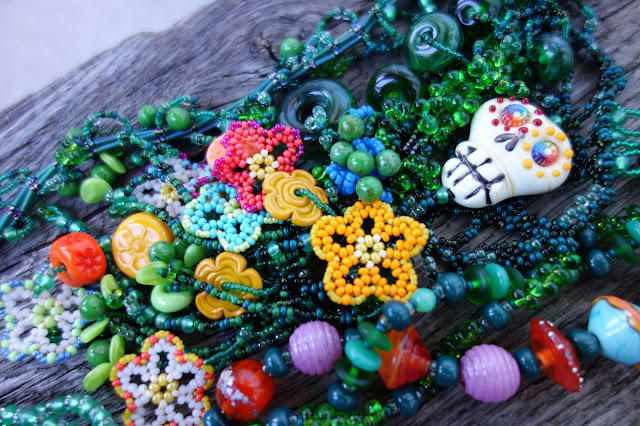 Unintentionally, this piece has become a tribute to my home.  Evergreen, apple green, spring green, and emerald - reminds me of the forests and fields.  From daffodils, tulips, and rhododendrons to the red, orange, and yellow fall foliage - all of these colors can be seen on a bed of rich green.  And so I give you my Homesick Boneflower necklace.  I will wear this piece year round, any time I am missing the PNW!

I hope you will hop along and check out what everyone else made with Jen's lovely skulls!  I'm off to do just that!