Hello all you bright and shiny new 2018 creatives!  Is the new year bringing you inspiration and joy?  It definitely is for me, as I am continuing to make 2018 into my creative renaissance year.  The last few years have been a bit more stagnant than I prefer, for various reasons, so I am making a real effort to indulge in all of my ideas and creative desires with no reservations now. 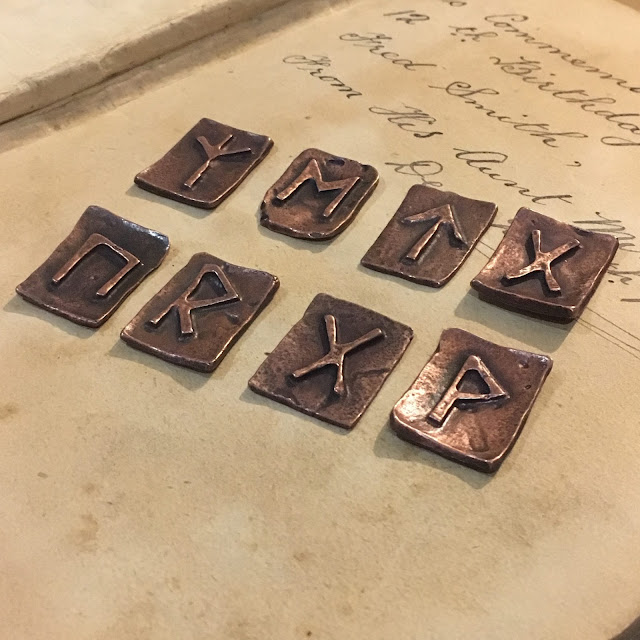 This month over at the Art Elements blog, we had the opportunity to create with one of Niky's lovely little copper clay rune components.  The one I received is called tiwaz (pointy up arrow), which is also the letter in the Norse god, Tyr.  Strangely, other than American pop culture (I am sure you can infer what I mean), I have never been exposed to any of the Norse pantheon, and didn't even know what runes are.

Tyr's rune, tiwaz is part of the Eldar Futhark language, or Old Norse written alphabet.  These letters each have a specific origin in Norse history, and several besides tiwaz are also named after specific gods in the pantheon.  Tyr is also the origin of our modern second day of the week, Tuesday.  I found a lot of interesting information on the Youtube channel of Dr. Jackson Crawford, especially this one, this one and this one.  While I know Eldar Futhark runes are often used symbolically in art, charms, talismans, what have you, I didn't go that route.  Thanks to Dr. Crawford, I tumbled down the rabbit hole that is Tyr's own story and made my piece reflective of this fascinating tale. 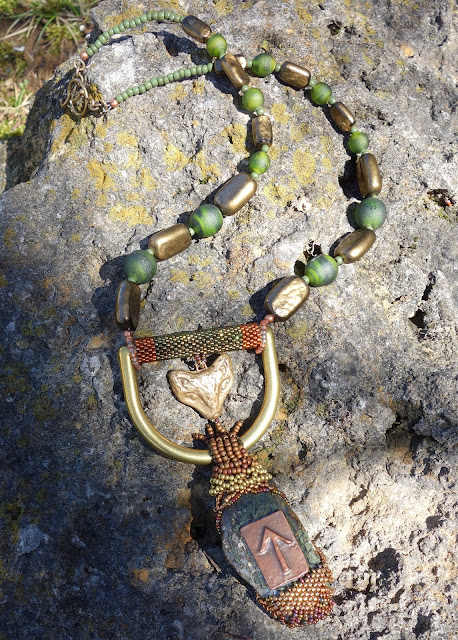 Tyr's rune typically represents a warrior or sacrifice, upholding law and justice.  This is because Tyr was a warrior that offered of himself for sacrifice.  The gods were struggling with containing the wolf Fenrir and his supernatural appetite.  Fenrir continuously escaped the chains that were intended to bind him.  When they forged magical chains that were powerful enough to finally bind Fenrir for good, the wolf became suspicious.  Fenrir balked at these new chains and said that he would only allow himself to be bound if a god was willing to offer his hand to be held in the wolf's mouth while he was bound, as a pledge of good faith.  Tyr was the only god willing to make this sacrifice.  Once the bindings were complete, Fenrir knew he could not escape and devoured Tyr's hand as the price of this betrayal. 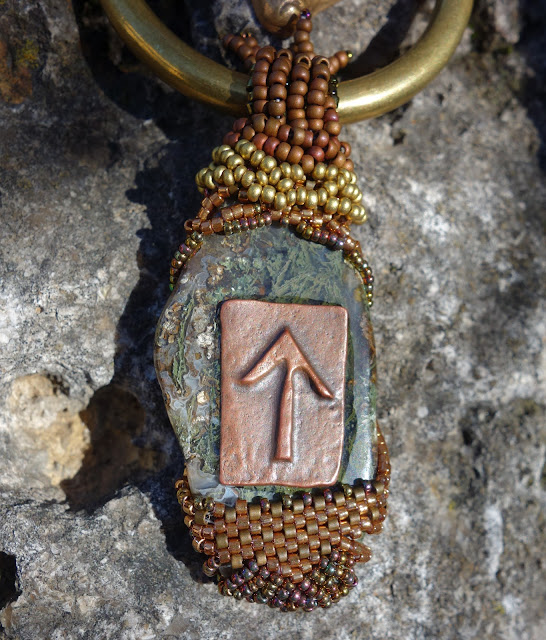 I started off by using epoxy to affix the rune to a beautiful slice of moss agate I've had for awhile.  I liked the look of the copper against the green and other colors in the stone.  After the epoxy cured, I captured the stone to suspend from a solid brass D-ring. I have a bit of epoxy exposed, but I felt the need to make sure there was no unattached edge that could potentially get caught and cause the rune to come off the stone. 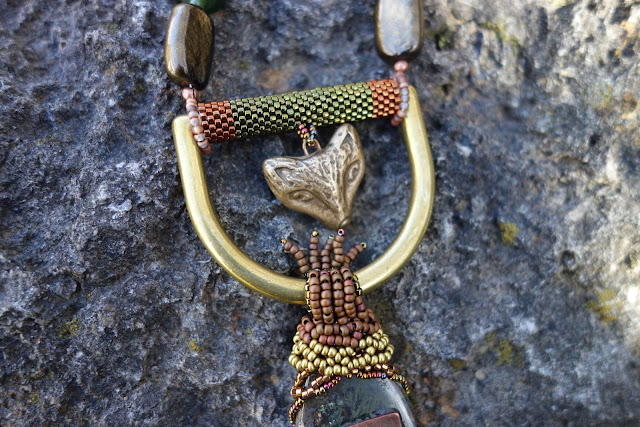 I used one of Lesley's bronze clay pendants to represent Fenrir.  I think she intended it to be a fox originally, but to me in this setting, it looks wolfy enough!  Once I got the wolf stitched in, I attached the captured stone and added some little "finger" fringe to represent Tyr's sacrificed hand. 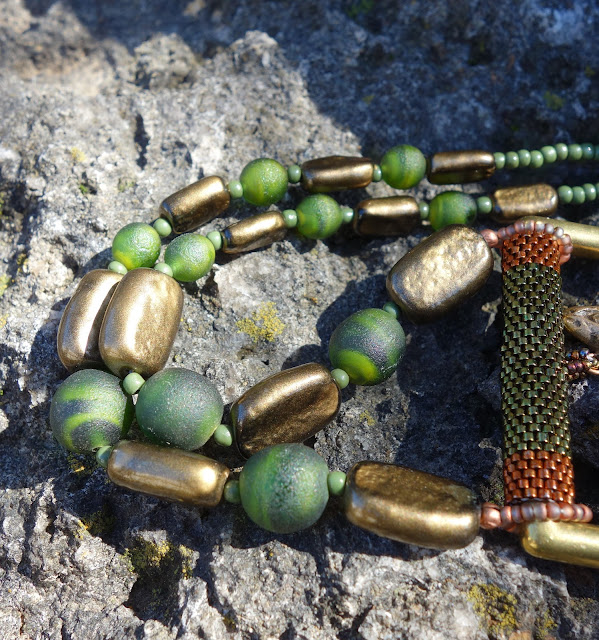 After I was done with the central part of the necklace, I set the piece aside for a few days because I could not make up my mind about how to do the strap.  Leather was high on the list but what I have that was appropriate didn't do anything for the color scheme.  I contemplated a piece of tubular woven brass, but felt like there was too much of the same color all together if I went that direction.  Suddenly, I remembered these vintage glass beads - matte green swirl rounds, and tablet shaped brass pearls.  It came all together quickly after that.  I don't know if you can tell in the pictures, but the texture on those green beads is to die for - so much rougher than modern matte beads, with none of the strange nails on chalkboard feeling that smoother matte beads have ... maybe that's just a me thing... 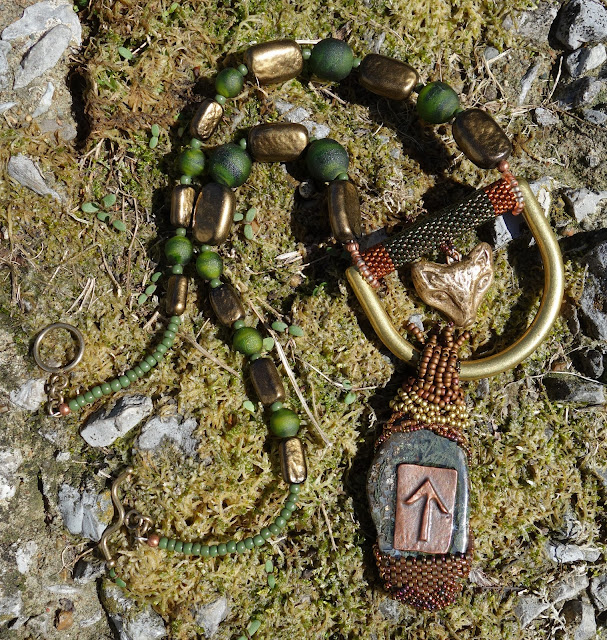 I'm really happy with how the whole piece turned out, but I'm not the most pleased.  I won't get to wear this necklace because it has been claimed by my other half.  That's ok though, he was due a new man-cessory! 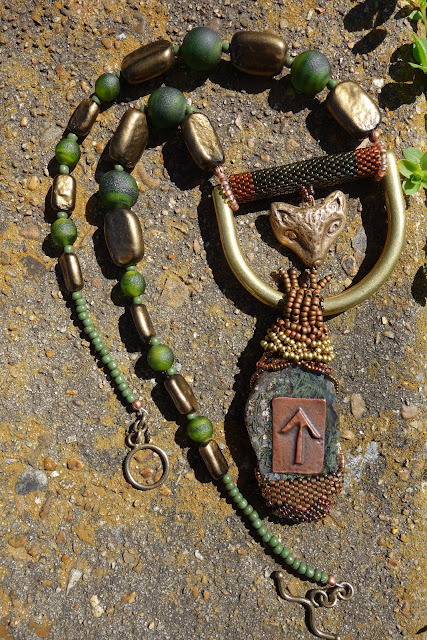 I hope you will hop along and see what everyone else has made this month!  My PIB Kelly received the exact same rune and I am excited to go see how her interpretation differs from mine.

One more thing before we go - The Art Elements blog has updated how we do challenges now, and you can participate every month.  Let me tell you, we are all excited about this change.  A little bird has whispered some of the upcoming themes in my ear and I already have so many ideas.  I hope you will check out the March announcement here and think about playing along with us!