When I saw my friend Melissa post about her love of the Outlander book and TV series, and how it has inspired her to create, I couldn't help but join in her Epic Inspiration challenge.  I am so visual in my inspirations, that I am constantly making notes while watching TV or movies, so that I can remember the ideas I had at the time.  I can immediately think of half a dozen shows or movies with inspiring jewelry - I sat and watched and sketched the pieces worn by the actors!  Because I am in the middle of packing for a move, there was simply no time for me to create a new piece - at least nothing in the grand scale that a challenge like this deserves.  So I decided (with Melissa's approval) to post about a piece that I made back in the fall, inspired by Frank Herbert's epic saga, Dune.

I've been a fan of Dune since before Highschool, when I both read the book, and watched the SyFy channel miniseries (I've never seen the infamous David Lynch version).  There are so many powerful themes and fantastic characters in the story, but what I see in my head when I read the book, is a slideshow of images from the miniseries.  I love the use of color in the show - to me the intensity of color from the sun, moons, and environment on Arrakis is a symbol in itself.  It shows us just how pervasive and important the spice melange is, to life on Arrakis, trade relations, and interplanetary travel.  Once I started thinking about color, several other things made it known that they needed to be represented in the piece:  the Fremen, stil-suits, dunes, desert, sand, spice, pre-spice mass, the sandworm, the dual moons, circles (ecological life cycle), and space.  OMG, I started to get overwhelmed - how do you translate ALL THAT into one necklace?  Well, in my case, I started with the Fremen: 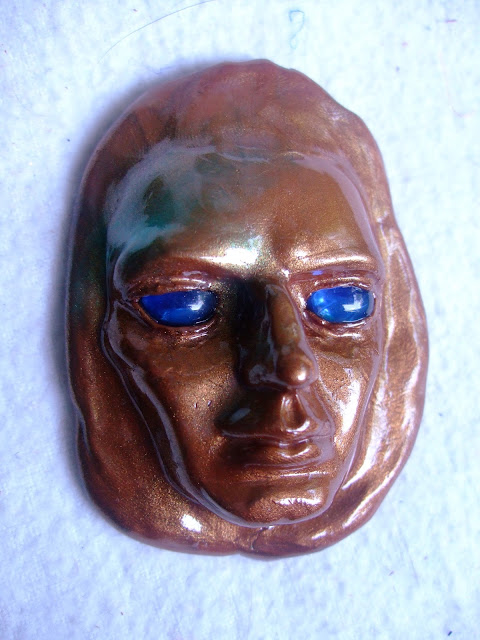 I used my favorite man-face mold to create my Fremen - the blue within blue eyed desert people of Arrakis.  To make the eyes luminous, as they are in the film, I used two small sapphire colored vintage glass cabs.  They have a foil backing and reflect light from certain angles.  I worked for quite awhile to get the cabs set in the clay just right - so the backing of each cab was perfectly level and matching...I didn't want the finished eyes to look cross-eyed...  Before I baked the polymer clay, I dusted on some Pearl-Ex powders in a range of copper and bronze, with a little bit of green.  You will see why I needed green in a bit...  After baking, I glazed the piece, and as soon as that was dry, I started beading the capture. 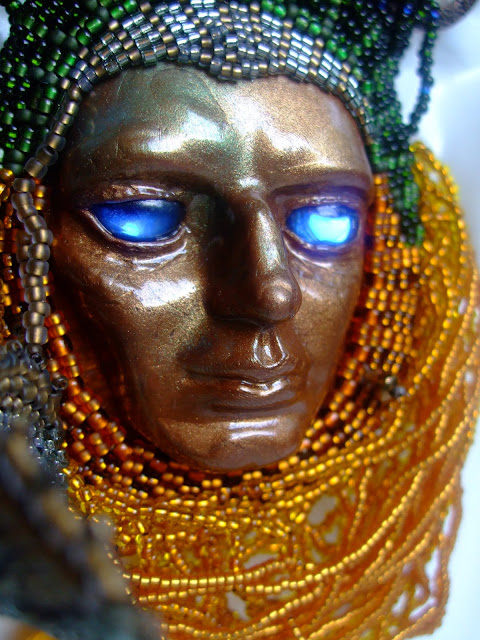 I wanted to incorporate the hood of a still-suit, along with the desert and night sky in the capture.  This left me with jumping off points for the rest of the necklace: 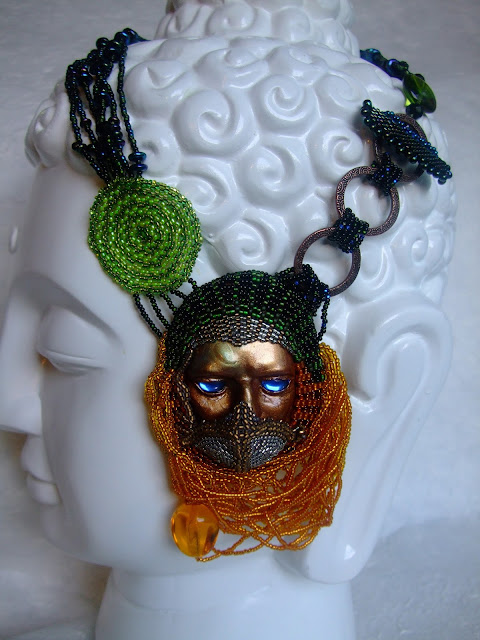 I also made the mask of the stil-suit able to open and close with a little bead latch.  The large yellow bead represents a pre-spice mass under the desert, buried by the swooping dunes of the desert sands.  One of the moons is represented with a piece of circular peyote, and I continued the circle/cycle theme with some Tierracast rings with beaded a toggle to fit through one of them and topped by a large green pressed glass bead.  . 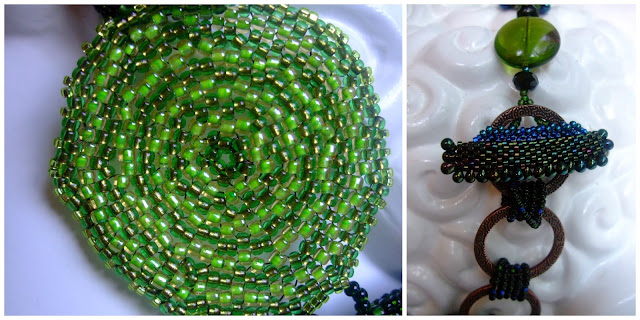 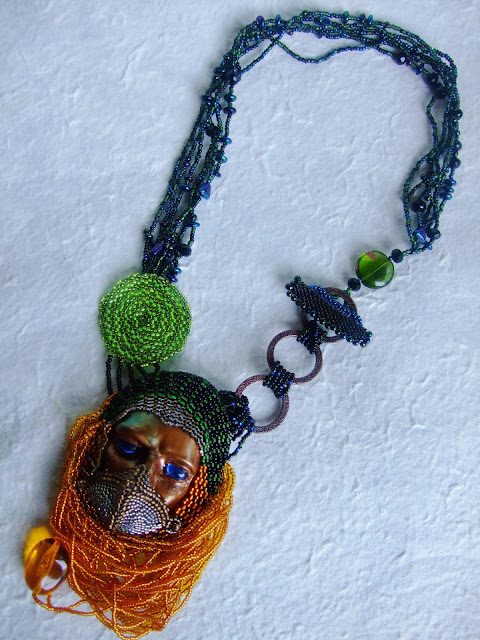 The majority of the strap is a random mixture of deep blue and green beads, loosely netted into a representation of space.
But there's one thing I still haven't shown you: 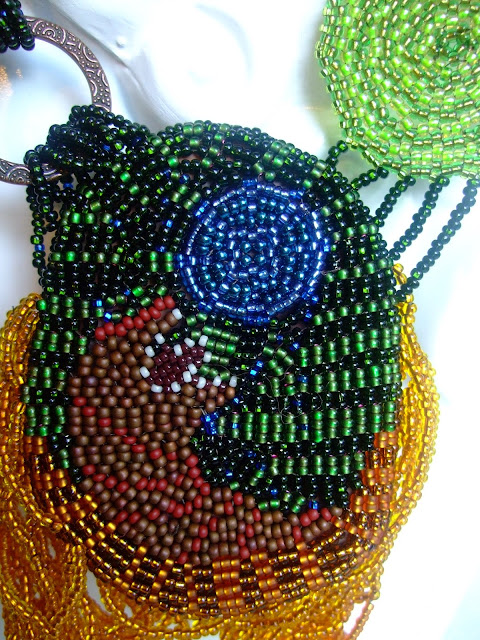 The back of the capture shows the blue moon of Arrakis, and the great desert Sandworm.  How could any Dune tribute be complete without the worm?  I don't think it can! 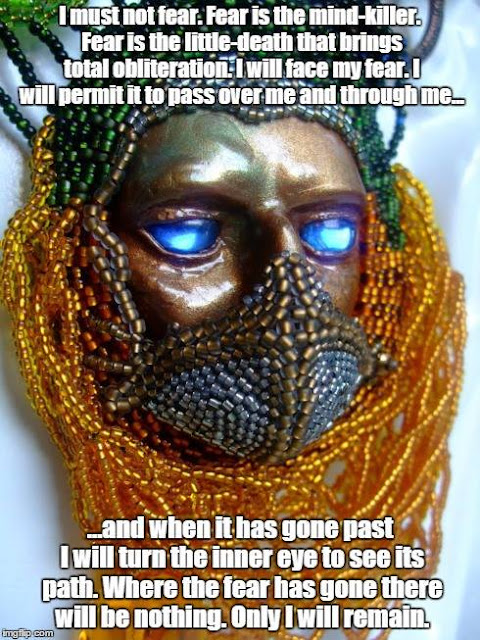 Your beauty shot this time shows one of my favorite quotes from the book.  Paul Attreides, aka Muad'Dib, uses this Bene Gesserit litany against fear when his perseverance was tested.  It has always stuck in my head as a life lesson - so much of our society today is based in fear of the mights and maybes.  If you can see past and move past the fear, it is truly freeing - I especially try to use this lesson in my creative exploits.  I hope you will check out the rest of the participants in Melissa's challenge!  I'm off to do that now!