Hello Everyone!  I promise, I'm still here!  2018 was just not a good year for us in so many ways, it sapped my energy, both creative and physical.  Perhaps my new years resolution last year was a bit grandiose, so I'm starting out a bit smaller this year with simply resolving to participate in the Art Elements blog challenge every month.

So to kick off the new year, I hosted the Moon theme challenge this month!  I knew I had plenty of kinds of moon themed beads and components stashed away, but nothing quite like what I had in mind, so I reached out to one of my leather worker friends. 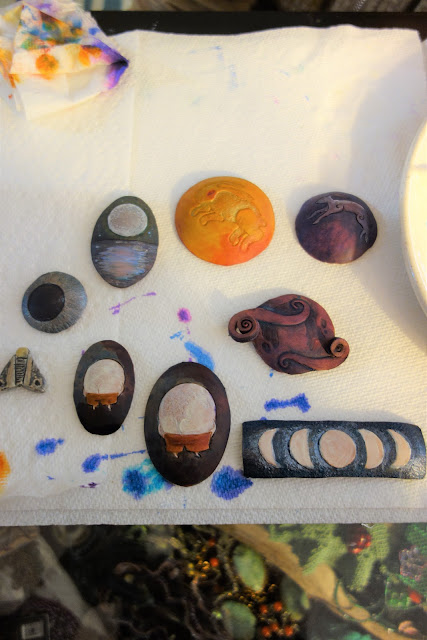 Mel is a ceramic artist, and has branched out into leatherwork in the last few years.  She had already planned to come spend a weekend with us earlier in the month, so I was super excited when she agreed to try to make a few moon themed tooled leather cabs for me.  She held off on the dying, and we had a fun creative evening dying and painting.  Dying leather is something that plagues many a leather worker with anxiety and doubt, however it is the only part of working with leather that I enjoy!  We set up on my coffee table and went to town. 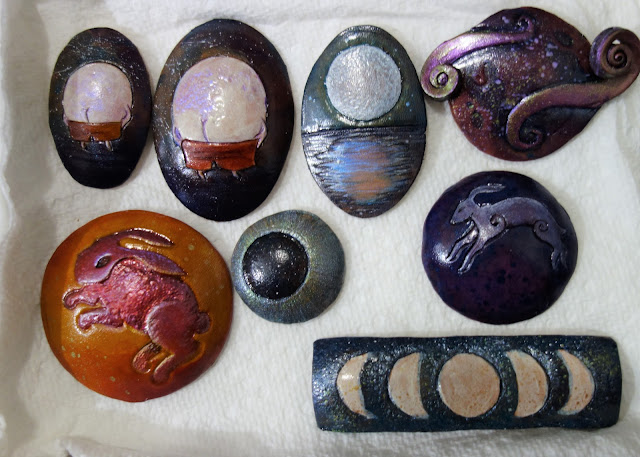 After she left, a few days later I completed a couple coats of finish so they are now colorfast.  The gloss also brightens up the color and detail considerably, as it removes the dullness that the surface of leather normally has. 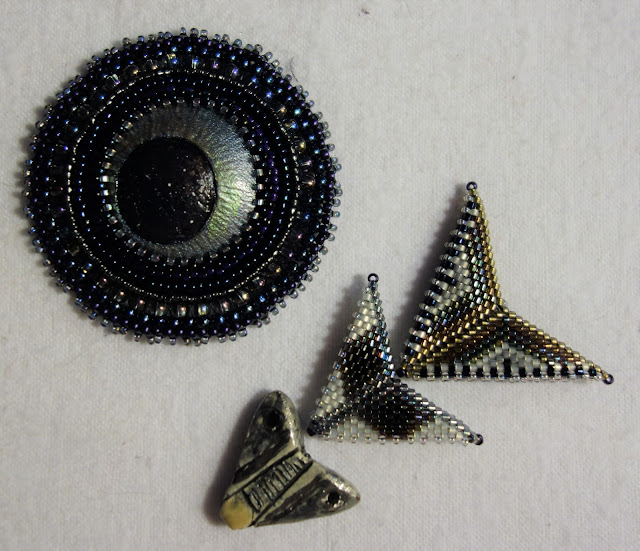 As I dyed the small moon, I had my little moth bead by Diane Hawkey on the table.  From the first second I saw it, I thought this little moth looked like a rocket ship. 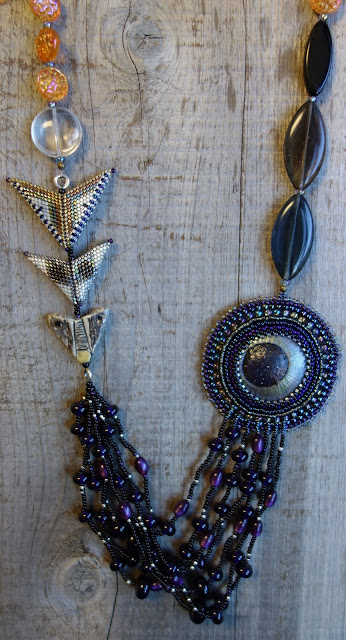 And so...we now have a necklace titled "Rocket Moth".

The necklace consists of four sections - the moth and beadwork flames, almost like the sections of rocket that part from the main space ship... 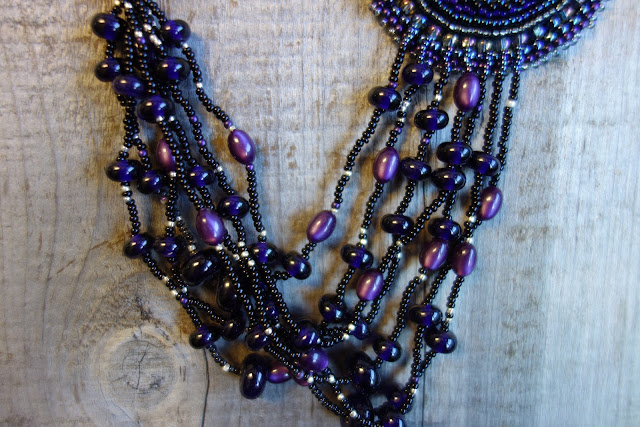 The journey to the moon - Black and purple velvet 11/0 seed beads are mixed with a few silver duracoat 15/0's, vintage lucite moonglow ovals, and the last of my itty bitty lampwork spacers that a friend made years ago.  He was a stained glass artists as well, and experimented with melting down some of his excess glass sheets for lampwork beads.  These little spacers look black at first glance, but if you hold them up to the light they are the most lucious shade of dark grape purple...I know the picture is a bit blurry, but it's the best representation of the color - between the angle of the light and the proximity to black, you can actually see a hit of the color.  To me, this is the color of space. 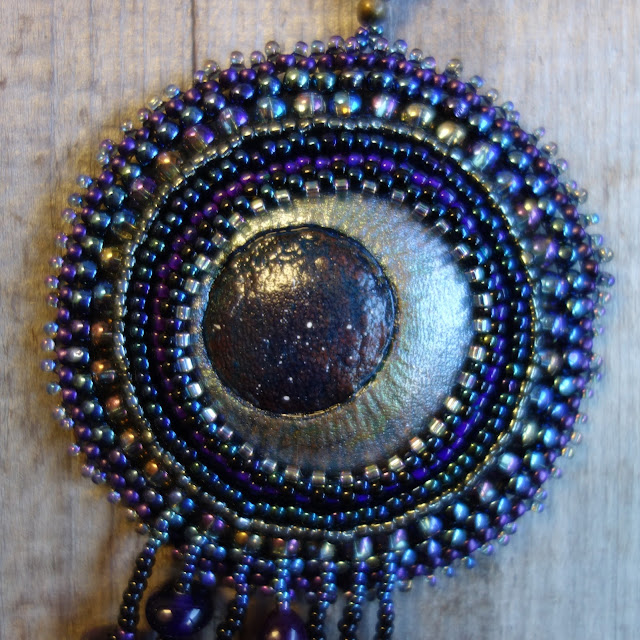 The moon - Mel's tooled leather cab has a peyote bezel, a few rows of embroidery, and then a few rows of brick stitch finished off with a picot edge.  I would have done the whole piece embroidered, but I was using scraps of ultrasuede and hit the edge of the scrap after 3 rows.  Because it wasn't quite large enough at that point, brick stitch added some more bulk until it reached the size I wanted.

And the galaxy!  Or really, the necklace strap, but why be all boring and call it that?  I raided my stash of large Czech pressed glass and came up with these two jumbo flat ovals - one in montana blue, and one in transparent dark gray.  A smaller size of black flat oval is mixed with textured dimes in a sunny orange with full AB coating.

I am really happy with the results of this piece, and it went together way faster than I was anticipating.  So much faster, that I had time to start and finish a second piece with another one of the cabs...  I am happy to introduce to you...(insert cheesy overly long drum roll here)....

Moonbob Squarepants.  I half-jokingly asked Mel for a mooning moon cab...I mean really, how could that even be done?!  But she did it, and I dyed it...and he ended up reading so much better than I could ever have anticipated!  I've worn the necklace a couple of times already, and the reactions of my coworkers are priceless.  It makes me giggle all day long! 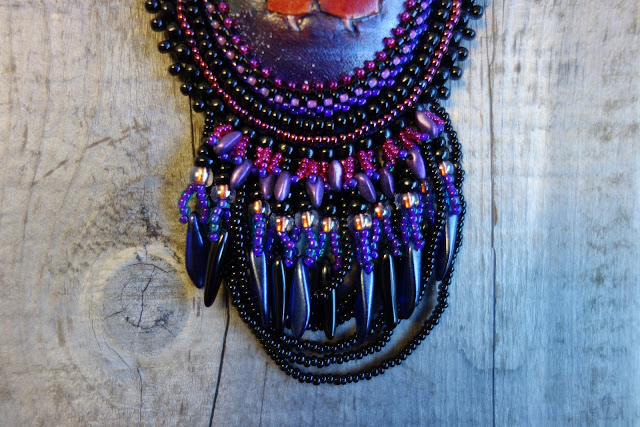 The fringe looks ornate, but is actually simple...there are 3 layers in different lengths.  I started with a base layer of looped fringe that arks from one side of the embroidery to the other.  The next layer alternates glittery blue daggers and thorns as the terminal bead, and the shortest is another looped layer with teeny pink seed beads and purple velvet mini-daggers. 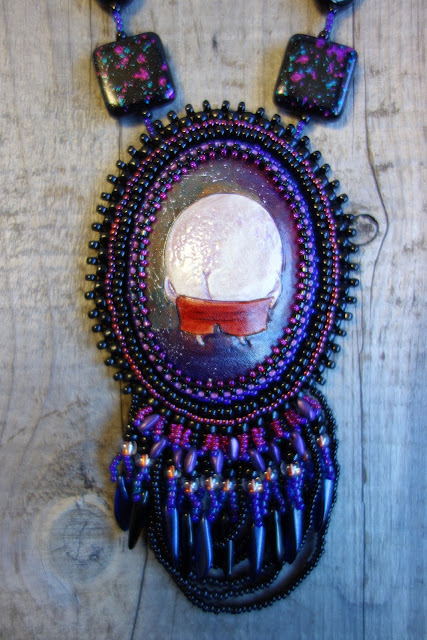 I do hope you will hop along and see what all of our lovely participants and crew were inspired to make this month!  I'm off to do that right now!

Lindsay (you are here!) 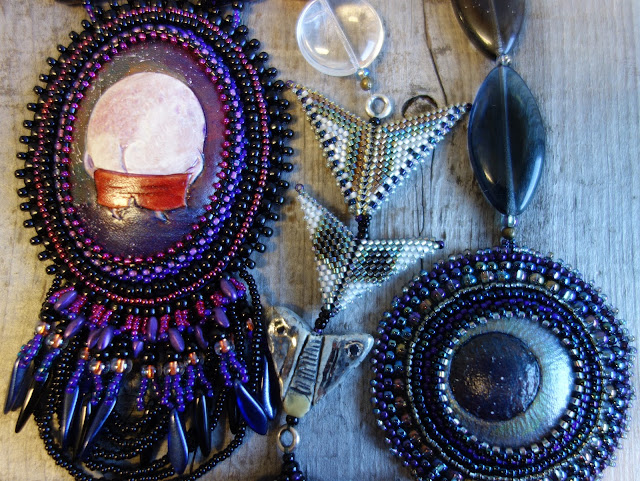